Pardot is a powerful marketing platform which includes 4 advanced Automation tools. Although each of these Pardot Automation tools deserves its own blog post, today we’re going to introduce the 4 tools and learn about how to select the right one.

Here are the 4 Automation Tools available for use with Prospects.

By the way – as defined in the Pardot Glossary – “Prospects are anonymous visitors that have converted and are now identified.”. They most closely resemble a Lead in your CRM. In Pardot the minimum information you need for a Prospect is an email address.

Automation rules are continuously running processes that identify Prospects based on criteria and allow you to perform actions. You can specify numerous criteria and numerous actions. Actions include a very diverse list of items. The important things to remember is that any individual automation rule will only ever match on a Prospect once and changing the Automation rules criteria will not be retroactive.

Segmentation rules are a way to create a one-time list of Prospects based on your criteria. Defining this criteria can include numerous items and numerous actions (primarily centered around list management). Once a list is generated from a Segmentation rule it can be used in other areas of Pardot.

Completion Actions are a way to perform an action based on some other event or action. They execute every time something else happens. For instance, a Completion Action could be configured to email internal staff when a questionnaire has been submitted. Think of them as “If this happens then do that”. Lastly, they are not retroactive and only working moving forward. Completion Actions can be used on Forms, Form handlers, Files, Custom Redirects, Emails, and Page Actions.

Dynamic Lists are rule based lists that dynamically update based on evolving Prospect data. Once you configure your criteria for inclusion on the list, Pardot will manage who should be on the list. This list management is ongoing and changes to Prospect data can result in Prospects being added or removed due to your criteria.

Deciding Which Tool To Use

Lets try to wrap this decision process with some guidelines which can at least point you in the correct direction. First, let’s look at an example and an approach.

Example: You want to change the Grading of all your Prospects who have a Job Title that includes the text “mechanic” by a full letter grade.

Use an Automation Rule that has a criteria that check if the native field “Job Title” contains the text “mechanic”. This Automation Rule also has an Action to “Change Profile Criteria” of a specified Profiles criteria to “matches”. This is also backed up by the fact that the Profile assigned to the Prospect has an entry corresponding to “Job Title” that, when matched, adds a full letter grade (3/3)

Below is a flow diagram that you can follow. 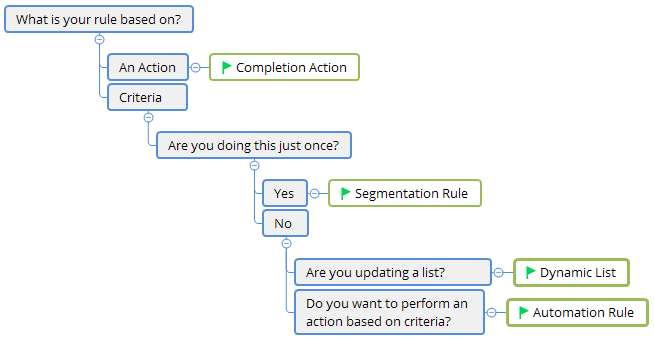 Interesting side note, ever wonder what Pardot means? It means “to market” or “to sell” in Latvian. If you would like help with using Pardot and Pardot Automation Tools, please feel free to contact us at www.cirriussolutions.com/contact.

About the Author: David Sarbello

David is a Salesforce developer and integration specialist who enjoys his family, skiing Jay Peak, and the occasional obstacle race.